View the award details at the Solar Power World website. 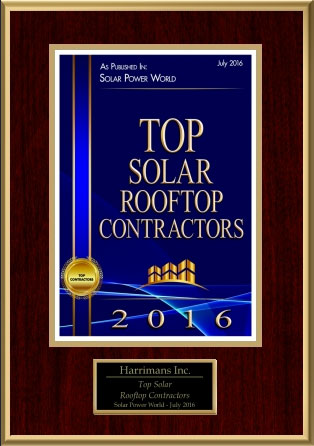 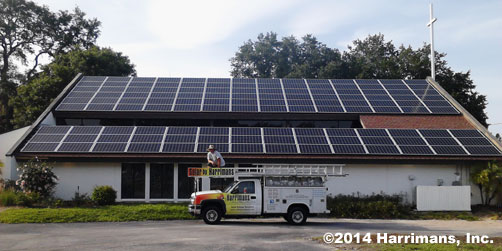 SEMINOLE, FL July 24, 2014 – Harrimans Inc. Solar Energy Systems was recently awarded a 34.6 kW solar electric system for St. Anne of Grace Episcopal Church.  The church elders at St. Anne’s researched solar contractors in the area for their installation.  “Several things stood out to us,” says Elizabeth Walker, church elder, “We were impressed by Harrimans’ experience with other non-profit organizations and that they were state certified electrical and solar contractors. Their track record speaks for itself.”

The solar panel system will supply a majority of the church and parish hall buildings electricity on a yearly basis with clean, Free Solar Energy as well as provide a Carbon Offset equivalent to 1,260 Trees Yearly. We are thrilled to be a part of St Annes decision to Go Solar.We are See more Churches and Non Profits looking to Solar not only to Save Money on their Electric Bill ,but to lead by example.”  Tom Harriman, President of Harrimans Solar quoted. 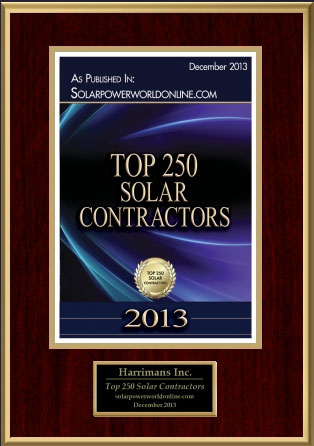 Cheryl and Terry have been living in the home they purchased from Manatee County Habitat for Humanity since July, 2012, and appreciate the low cost of living – especially the tremendous savings they are finding in their electric bill.  In addition, Cheryl and Terry will tell you how secure they feel in their home and that they appreciate how quiet their home is as compared to the rental houses they lived in before.  They say the temperature of their home is always comfortable.  Thanks to features such as added insulation values, high quality windows, an efficient air conditioning system, solar water heating, and the solar panels, Terry and Cheryl are enjoying the many benefits of their green home.

Cheryl and Terry helped build their Habitat home and know firsthand about the insulated walls that have solid concrete poured into them that adds to their comfort and protects against hurricanes.  Terry says, “We have a home that not many people get to have.  Most people don’t understand how much this home helps our family save money, live healthier, and be protected.” 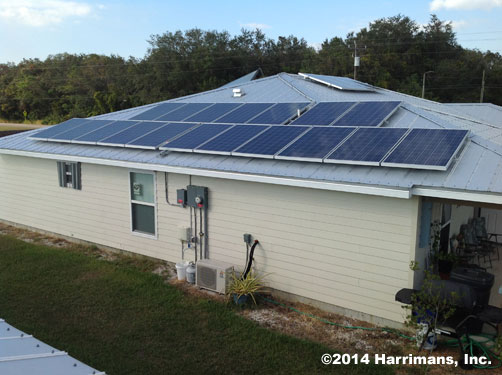 Terry has taken the time to educate himself on the many green features of their home and takes great pride in the efficiency of their habitat home.  He reads the water temperature monitor and notes that the temperature is consistently between 110-120 degrees.  Terry says they haven’t had any water pressure problems and there is plenty of hot water.  He enjoys checking the solar panel output on his computer and says he likes to watch in the morning as the sun is coming up and the electrical readings increase.  Terry says “I show it to everyone who visits.  I can see how much electricity is being produced each month.  It is like watching us save money.”

Terry and Cheryl and granddaughter Bailey especially enjoy the big front porch for sitting and the feeling that it makes the house seem bigger.  The family says there is always a breeze because it is open on three sides.  The house also has a great open floor plan with minimal hallways.  They find, with ceiling fans running, they can set the thermostat to 82 degrees and feel very comfortable.  Terry says “people don’t believe it is set at 82 degrees when they are visiting, they think it is in the low 70’s.”

This family takes great pride in their Habitat home.  “I show it to everyone I can” says Terry, “Anytime someone has come to do work, deliver packages, or stops in front of the house because they see the solar panels, I ask them if they want to see more.  I tell people about watching my water temperature as it changes between sunny days and cloudy ones and how I watch the computer program that lets me see the panels start producing in the morning and fall off in the afternoon.  I like to look at the electricity produced at night during a full moon.  We now do our laundry in the morning when we are producing power and not in the afternoon when other people need power.  It is great to see our meter run backwards and know we are saving money.”

See the movie: Revenge Of The Electric Car 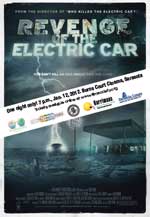 Harrimans Inc has recently completed the installation of the Solar Photovoltaic Electric system and Electric Vehicle Charging Stations (EVCS), for the LEED Gold Certified Palm Avenue Parking Garage, being built for the City of Sarasota, in Downtown Sarasota.

Harrimans Inc. Solar Energy Solutions has been approved for participation in the Get Energy Smart Retrofit Program.

Dept of Enviromental Protection/Division of Recreation and Parks chooses Harrimans to go Solar.

Harrimans selected as one of the Best Green Businesses by biz941 Magazine.